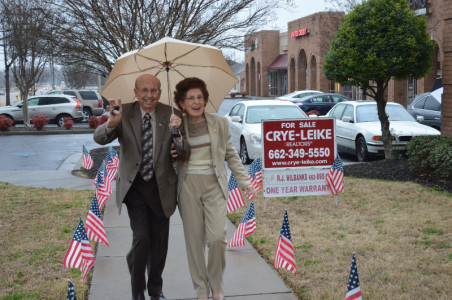 Born and raised in Ripley, Miss., Wilbanks proudly says that his mother didn't give him a first name, but just wanted the initials, RJ, to be named after his grandfather on his mother's side, Robert Jefferson Medford.

Having initials for a first name may be easy to remember, but Wilbanks shared a few stories that come along with it to the well-wishers at his company retirement party. Like the time when he tried to enlist in the United States Army.

"The officer asked me what my real name was and I honestly said that my mother didn't give me a first name, just the initials," says Wilbanks. The officer proceeded to say that Wilbanks's mother was going to have to give him a first name other than RJ.

The 21-year-old civilian respectfully but eagerly replied, "Well, if you wont enlist me because I dont have a first name, then I have a bus ticket in my hand and can go back home right now."

His Experiences in the Army. Despite being RJ, and not Robert Jefferson, the United States Army enlisted him anyway. He was stationed at Fort Knox, Kentucky Army base in March of 1944 where he was trained as a tank crew member.

Wilbanks served as a tank crew member in a light tank of the 21st Tank Battalion of the 10th Armord Division of the Third Army. As a crew member, he operated the machine gun in the bow of the tank against enemy personnel and vehicles.

He participated in three major campaigns during World War II and holds the Bronze Star for meritorious achievement, serving an 18-month European theatre.

"He's a true living hero with a mind still sharp as a tack," says Crye-Leike General Manager Steve Brown as he witnessed RJ remembering vivid details of his service in the military.

"In the fall of 1944, while fighting in the Battle of the Rhineland, I had to replace the tank driver who got hit with shrapnel," says Wilbanks. "During the Battle of the Bulge, I remember our troop being surrounded by Germans for 10 to 12 days. Another time, I was on night patrol in a small village, when I heard the Germans sneaking in. I stopped them by opening fire, alerting the guards."

The men and women who fought and won the great conflict are now mostly in their 90s like RJ Wilbanks. They are dying quickly at a rate of approximately 430 a day, according to the U.S. Veterans Administration (USVA) figures. During World War II, 16 million Americans served their nation. Today, that number stands under a million, says the USVA, and by 2036, it is estimated there will be no living veterans of World War II left to recount their experiences.

Wilbanks' 35 Years with Crye-Leike. A resident of Olive Branch, Miss., Wilbanks earned several sales achievement awards with Crye-Leike during his 35 years as a sales associate. He honorably added, "I worked by the Code of Ethics and high standards which Crye-Leike sets for its agents."

There was much admiration shared at the retirement party for Wilbanks. Three different Crye-Leike managing brokers were present who had been his sales manager over his 35 years of service to the company: Robert Clay, Jimmie Hopson, Jr., Margie Mays and CF Moore.

Hopson described Wilbanks as a true professional who he has known since he joined Crye-Leike in April 1990. "I admired RJ because he supported me when I became the managing broker at Crye-Leike's Whitehaven office, even though I was a lot younger and he had been in the business longer," says Hopson. "RJ always offered inspiration and wisdom to our office. He was respected by all agents."

At age 92, Wilbanks said that he decided to slow down. His last real estate deal was in August 2015. "With technology advancing faster than I could learn it and my cornea transplant keeping me from seeing the computer screen very well, I was relying on my real estate friends too much," says Wilbanks. "So, I decided to switch to working with Referral Center, Inc. which offers real estate agents supplemental income for referrals."

"RJ has dedicated himself to a lifetime of service from serving our country to 32 years in the life insurance industry as a certified life underwriter before entering his second career of 35 years in real estate," says President and Co-Founder Dick Leike of Crye-Leike, Realtors. "Crye-Leike was fortunate to have RJ associated with us for all these years. His presence will be missed."